Are you actually making a difference?

As owner of your business I’m sure you’re well aware that your people look up to you as a leader. Your employees’ previous experience with leadership – good and bad – has by and large convinced them that as the boss you’re in a position to significantly influence their performance and therefore the performance of your business.

But is this actually the case?

You might be surprised at me posing this question at all!

You might also be surprised to know that despite a huge amount of research, many people believe that leadership has relatively little effect on performance. The argument goes that the size of your business and the industry you’re in has a much greater say in outcomes than your best efforts as leader.

(Maybe here lies the start of an explanation for why so many Tier 1 Engineering and Construction contractors such as Lend Lease, Laing O’Rourke, CPB etc similarly lose money on major infrastructure projects in Australia but that’s a rabbit hole for another article…..)

Interestingly, the “leadership link to performance” debate has not moved forward that much in nearly six decades. This is despite a heap of criticism over the years levelled at an early study carried out by Lieberson and O’Connor, who in 1972 proposed that whilst leadership can and does impact organisational performance, the overall impact is insufficient to outweigh the inbuilt differences between firms that largely account for performance variation among firms.

Further, many argue that the impact of leadership on performance just a social construct - people interpret it that way.

So where does this leave us?

I believe that the answer lies with what leadership actually is. If leadership is about influencing and guiding others rather than doing everything yourself (and rest assured, this is what leadership is all about) then you as owner can’t effectively operate in a vacuum. Like it or not, you are intrinsically linked to your employees – and vice versa – and absolutely rely on them for the performance of your business.

It stands to reason then that you need great employees to achieve outstanding performance. You might also need to invest in your leadership style and skills if you’re truly committed to building a great business (here’s a tip – the traditional construction industry “knock-em down, drag ‘em out” style of getting things done just doesn’t cut it any more).

You know you’ve got the knowledge to make this business hum, so why isn't it working?

Over a 30-year career in Engineering and Construction I’ve experienced first-hand the challenges that businesses small and large face in getting things to really hum along. The circumstances may differ…

Building a business in infrastructure engineering and construction

A roadmap to sustainable growth 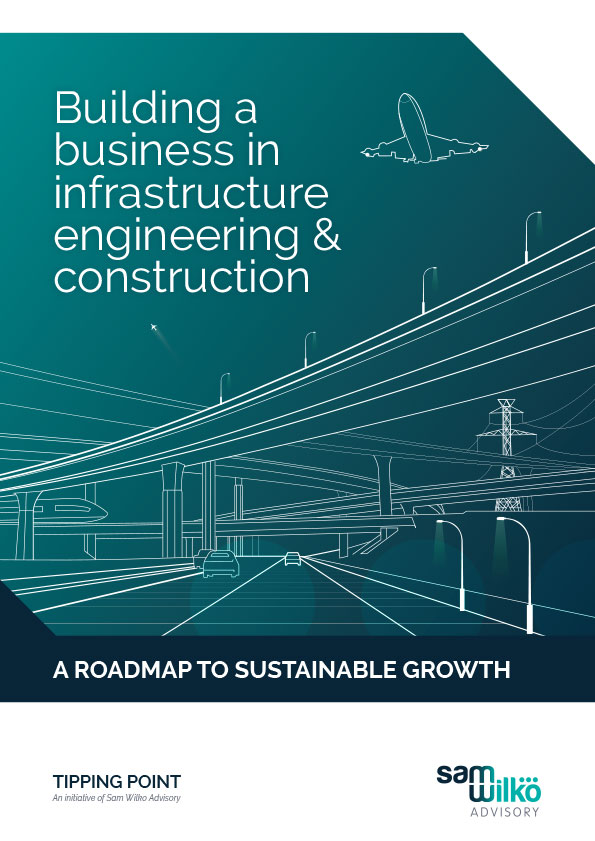 Get Your Free Copy

Building a business in infrastructure engineering and construction

A roadmap to sustainable growth

Don't confuse thriving with growth. All successful businesses in this sector have one thing in common - they've already grown against the odds despite working on high risk, cashflow demanding projects while balancing the increasing costs of winning highly competitive tender work inherent with infrastructure projects.

Whether you are a sole operator, or a multi-partner firm if you aren't at the tipping point yet, you will be! Initial growth will drive your business to a tipping point that will stagnate your ability to function effectively either choking your operational capacity, or forcing you to find new sources of higher value revenue from what often looks like closed doors.

The good news, is that tipping point is actually a rite of passage in disguise. Plot your course well, learn some new strategies and you'll emerge in a new phase of business called "Sustainable Growth".

We present here practical insights into proven strategies that have helped businesses similar to yours plan for, travel through and then thrive beyond the tipping point.